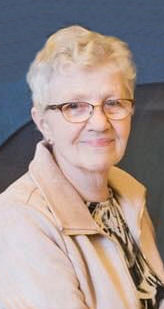 Please share a memory of Roberta to include in a keepsake book for family and friends.
View Tribute Book

Bobbie, the daughter of Charles L. and Mariann (Peterson) White, was born February 8, 1943, in Marshalltown, IA. She was a graduate of the Des Moines Technical School, Class of 1962.

On March 26, 1963, Bobbie was united in marriage with Carl E. Collins, Jr. They moved to Newton in 1965. In 1974 they purchased Newton Office Supply Company, a business they operated for more than 40 years. Bobbie was also employed by the Newton McDonalds and the Jasper County Care Facility. She retired from Progress Industries in 2008 after eleven years of service. Bobbie was an active member of the Daughters of the American Revolution and volunteered at the Jasper County Genealogical Society and the Jasper County Historical Museum. In the 1970's & 80's, she and Carl enjoyed western style square dancing. Bobbie was a 20-year member of the Central Iowa Square Dance Caller's Association.

Funeral services for Bobbie will be 1:30pm, Thursday, July 22, 2021, at the Pence ~ Reese Funeral Home in Newton, with a visitation an hour prior to the services. In lieu of flowers, memorials may be designated to Progress Industries, Wesley Life Hospice or a charity of your choosing. Burial will be in the Newton Union Cemetery.

Facebook Broadcast of the Funeral for Bobbie will be held on the Pence ~ Reese Funeral Home and Cremation Services Facebook page.

Bobbie was preceded in death by her parents and her brothers: Larry and Dennis White.

The family would like to extend a special and heart felt thank you to all the kind and caring staff at Nelson Manor and Wesley Life Hospice.

To send flowers to the family or plant a tree in memory of Roberta Collins, please visit Tribute Store
Thursday
22
July

Share Your Memory of
Roberta
Upload Your Memory View All Memories
Be the first to upload a memory!
Share A Memory
Send Flowers
Plant a Tree