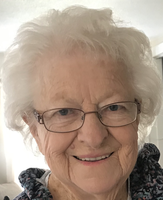 Violet Jean Revell, the daughter of Raymond Richard and Etta Mae (Wickliff) Buckley, was born April 23, 1933 in Newton, Iowa. She graduated from the Colfax Senior High School with the Class of 1951. On October 18, 1952, Jean was united in marriage with Joseph Dean Revell in Unionville, Missouri. Jean worked for Winpower in Newton building generators. She was a member of the Metz Church. Jean loved her family and enjoyed many traveling adventures with Dean. Jean died on Thursday, December 3, 2020 at her home in Newton. She was 87 years old. Jean was preceded in death by her parents; her husband, Dean on August 25, 2018; a daughter in infancy; her seven sisters and four brothers. Those left to honor Jean's memory include her sons, Joe (Denise) Revell and Jon (Tracy) Revell; her daughter, Carol (David) Laufer; her ten grandchildren and thirteen great grandchildren. Private family services will be held at the Iowa Veteran's Cemetery in VanMeter, Iowa. The family requests no memorials other than your prayers. Pence ~ Reese Funeral Home in Newton has been entrusted with the arrangements.