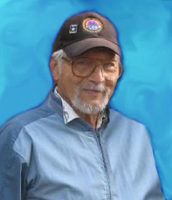 Roy William Eilert, the son of William August and Marie Dorothy (Schnathorst) Eilert, was born April 7, 1924 on a farm north of Newton, Iowa in the old German settlement. Roy was baptized at St. John’s Country Church and later joined the United Presbyterian Church in Newton. As a young person, he was involved in 4-H and the Malaka Northern Lights. He graduated from the Newton Senior High School with the class of 1944. Roy served his country in the United States Army. On April 8, 1949, Roy was united in marriage with Bonnie B. Swalwell in a large ceremony on her parent’s farm west of Newton. Roy worked as a union carpenter and always seemed to have many side carpentry jobs in the works. Roy was also involved as a lifetime member of the Herschel Briles AMVETS Post #50 in Colfax, IA. He was a longstanding member of the Carpenters Local 106 in Des Moines, Iowa; and the Izaak Walton League and Farm Bureau. He had belonged to the Sugar Grove Grange, the Richland Grange and currently the Amboy Grange in Kellogg, IA. For many years, Roy and Bonnie participated in the Iowa State Fair with the Blue Ribbon Foundation. Roy made the three stained glass windows with a Dove holding an olive branch for Pioneer Hall, where church is held on State Fair Sundays. Roy and Bonnie have participated for over 30 years at First Church on the fairgrounds as “Keeper of the Key”, greeting people entering church, shaking hands and hugging people after hymn sing, and locking up First Church at night. Year after precious year, Roy took part in many contests at the fair including, cow chip throwing, hog calling, log sawing, leg contest, egg rolling and the list goes on… Roy lived life to its fullest in his 91 ½ years. He was a friend to all, loved his family dearly, and was ready to go to his Lord whom he loved so much. Roy died on Friday, October 9, 2015 at Careage of Newton. He was preceded in death by his parents; a son-in-law, Terry Beals, his sister Margaret Thompson and his brother, Don Eilert. Those left to honor Roy’s memory include his wife of 66 ½ years, Bonnie, of Newton, IA; his daughter, Sheryl Eilert Beals; his grandchildren, Richard (Lana) Beals and Carrie Beals; his great grandchildren, Ryan Beals, Kayla Gragg, Danica Linn and Cadence Linn; his step great grandchildren, Raynee Quick and Avery Lees; his sister Arlene Rinehart and his brothers, Wayne Eilert and Larry Eilert. Memorial services will be held 11:30 am, Wednesday, October 14, 2015 at the Pence ~ Reese Funeral Home in Newton. The family will greet friends from 11:00 until service time and again following the service during lunch. Per Roy’s wishes, his body has been cremated with private burial in Restland Cemetery in Baxter at a later date. In lieu of flowers, memorials may be designated in Roy’s name and may be left at the funeral home.